Free Nap Pad Instructions For The First Thing I Made Sophia


Sophia was around three years old when I adopted her. I am not going to go into her background, but be assured her life had been miserable. It became important to me that I make something for her, as some type of statement of, “someone loves you now.” I had quickly bought a bed a Wal-Mart, but wanted something girly-girl for her. After all, she was a female Poodle and the first Poodle that I had ever had.

I came up with a reversible envelope pad.  It can go everywhere, be turned inside out, and even cover up a heating pad, if needed. It has been used considerably during the last three years.

I am sharing with you how I made it. I am experienced with writing knitting patterns. But this is the first time that I have tried something to be sewn. I hope it makes sense.

*About the fabric-Most double-faced quilted fabric is 43” wide. You need to get enough for the size of cover you want. My project was 15” wide x 21” long.  I had plenty with a yard of fabric. You need to get two other pieces from the yardage; the flap which is 6” x whatever width you want, and a strip for the binding for the opening.

Techniques needed for this project is modified Flat Felled and a French seam.

A French Seam is really very easy. But rather than try to explain it, I have found a You Tube video that demos it.

Directions
1. Cut the envelope. If you don’t want a pad larger than 20” (mine was 15”, but Sophia is a small dog) just cut across the fabric.  You need to make sure you have 1 ½ seam allowances for both the flat felled and French seams.

2.  Cut a 3” wide binding for the opening if the envelope.

4.  Sew the side t(or sides) together with a modified flat felled seam. I actually just did this by hand.

6.  Sew the binding on the opening. I just thought of this, but you could use blanket tape on this opening also.

7. Round off the corners of flap, and bind with blanket tape. The blanket tape will not want to lie flat around the corners. A little gathering didn’t bother me.

8. Make three button holes on each side of flap, sew large snaps or attach velcro (your choice).

9. If you use buttons, sew them on each side of the envelope, both inside and outside. You will need 12 buttons.


10. Insert the foam and button the buttons and it is nap time.

Here is a layout of my material. I had about 6" left over. But I bought a yard and really didn't need to. 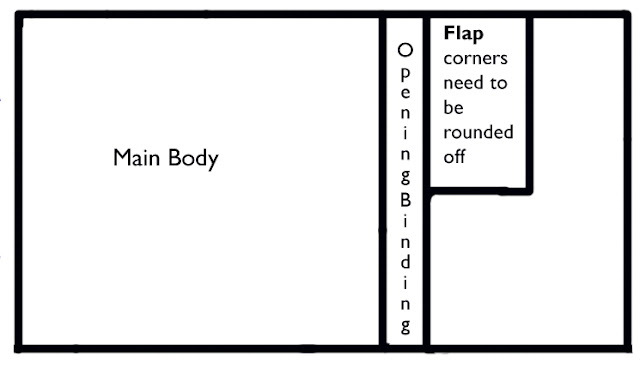 I hope you find these instructions clear and this project useful. This  nap pad has been everywhere, including car travel. The next project I will have for you will be a completely no sew one.

I would welcome comments of this project as to it's clarity. If anyone makes this nap pad, please send me a pic (with your napper on it, of course) and I will feature your project. Terri